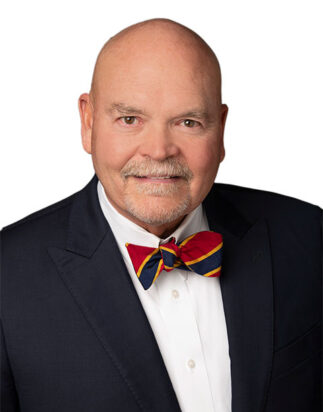 “David and his staff were friendly, thorough and professional. I was kept informed on how my case was going and was more than happy with the outcome.”
- MC
35 years
of Legal Counsel to Clients
Over 3,000
Cases
Contact David J. Rebein

David has devoted his career to representing individuals in their efforts to obtain justice through our civil court system. He has tried hundreds of cases and represented Fortune 500 Companies as well as individuals in high profile employment and personal injury cases. He is at home in both Federal and State Courts.

“What I do is simple. I’m a trial lawyer. A majority of my cases come from lawyer referral. I only take cases that I believe in and can fully devote my time and resources. If the case is not a good fit, I’ll refer the case to the best lawyer that can handle it.”

“David Rebein and his staff were professional and courteous as they handled my case. They were always available to answer questions. They maintained contact with me and they settled my case efficiently. I appreciate Mr. Rebein’s efforts on my behalf” – C.C., Client

“David and his staff were friendly, thorough and professional. I was kept informed on how my case was going and was more than happy with the outcome.” – M.C., Client

“I have nothing but great things to say about David. I was in a car accident and become disabled. David would go out of his way to visit me and kept in touch with me on a regular basis. A friend told me that David was on the best and he was right. My case went smooth and it yielded great results. If you want the best of the best, David and his staff are the one’s for the job.” – J.J., Client

“I have worked with David Rebein on many matters and have always found him to be knowledgeable, prepared and willing to fight for his client.” -K.S., Fellow Attorney

“My car was totaled when someone pulled out from a stop sign and crashed into my wife. She wasn’t hurt but the insurance company wouldn’t pay. I only had liability insurance on my car. I was stuck. No car and no money to buy another one. My boss called David Rebein. He got them to pay but wouldn’t charge me anything. I guess I look differently at lawyers now.” – J.V., Client

“David Rebein took my case after another law firm told me that I didn’t have a claim. The Rebein Brothers office has a family feel, I was treated wonderfully from the moment I walked in until the moment I left, by everyone working there. My case was handled in a timely manner and I am very satisfied with the result that Dave was able to get for me.” -B.H., Client

“David Rebein is one of the top 10 trial lawyers in Kansas.  I regularly refer clients to him because I know his firm will handle the matter ethically and will achieve the best results possible. If you are in need of a lawyer—you don’t need just a good lawyer— but the best lawyer.  Hire David Rebein.”
– T.M., Fellow Attorney

“The law firm of Rebein Brothers is a professional and upstanding firm.  I went to them when I was involved in a motorcycle accident, where I was the victim of a hit and run.  David Rebein and his staff always kept me informed and explained the process so I could understand everything.  They had my best interests and recovery as their first priority.  Mr. Rebein would call me throughout my recovery and check on my status.  I could not have asked for a better attorney to handle my case.  They were successful in getting what I needed to settle my case.”
-J.L., Client

“Rebein Brothers Trial Lawyers are a fabulous team of attorneys!  They are a true gift to the legal community.  You can’t help but have the deepest adoration for David Rebein!!  I am extremely grateful to know him and to work with him.  Our community is better because they are in it.  And, not only are the firm’s attorneys spectacular, but their entire staff is phenomenal as well!  You all should be thanked more…so thank you!” – C.C., Colleague

“There is no greater thrill than to accept a case on behalf of a client and bring back a jury verdict in their favor,” says Rebein. “I am committed to helping others and I want to bring peace of mind in the midst of chaos.”

Walking Into Tragedy: Death of a Parent

My job often entails walking into a tragedy and then trying to help a family through the difficult terrain of the legal system. Often, my cases...
Read More

The Country Lawyer and the DMV

This Country Lawyer is not used to waiting for much of anything. Rural Kansas is not big on lines but Covid has put a bit of a kink in things. I...
Read More

94% of Car Accidents are a Result of Human Error

According to the U.S. Department of Transportation, 94% of vehicle accidents are caused by human error. While weather, poor road conditions or...
Read More

The Power of a Referral

I think we’ve all struggled at one time or another with what to believe about a product or a service. When it comes to lawyers, it can be a...
Read More

Truck Accidents in the Midwest

In Western Kansas, we depend on the trucking industry for the delivery of our agricultural products to the rest of the world. There are thousands of...
Read More

The Country Lawyer and the Blame Game

I am a trial lawyer. My cases involve unfortuanate tragedies where a loved one has been maimed or even killed by another person. Usually, it is not...
Read More

Judges – Giving Credit Where Credit is Due

A Western Kansas Judge will see a lot of humanity over the course of a day. They may handle a divorce, set the bond hearing in a drug case, try to...
Read More

You Can’t Keep A Good Man Down

My friend, Don Burnett of Larned, Kansas has been a country lawyer for 59 years. He has friends and admirers galore. Don has been battling cancer and...
Read More

I put about 40,000 miles on my truck a year. I have cases all over the state and some across the country. I have a nice office and, of course, meet...
Read More

Simply put, we care about the well-being of our clients.

We will always protect your interest and guide you in the right direction.

Why should I bring my case to you?

We are the Lawyer’s Lawyer. 90% of our cases are referred to us by other lawyers who have confidence that we can do the job and do it …Continue

How do you select cases?

We like to take a “good” case and make it into a “great” case. To do that, we are selective. We can quickly analyze the case and let you know if it fits our program. Even if we don’t take …Continue

Do you handle out-of-state accidents?

The short answer is YES! We have handled cases all over the country. Truck cases are covered largely by Federal laws and are similar in every state. Sometimes we engage local attorneys to help us. …Continue

Do you charge by the hour?

The initial consultation is always free. We partner with the client for a percentage of the recovery. If there is no recovery, you will pay no fee. You will never get a bill from us. We settle up at …Continue

What sets your firm apart from larger firms?

We are a small firm because we want to take cases and be certain that we can give each case our utmost attention. Working in a smaller setting, you can rest assured that your attorney will be …Continue

How do I know if I have a personal injury case?

Our attorneys help individuals or families through the medical and legal issues that arise when a person is seriously injured or killed due to the fault of another. While the most common examples of …Continue

Let us guide you in the right direction.

Would you like to hear from us? Let us know.
© Rebein Brothers PA | Get Our Newsletter